I recently won this book on Tanya Kovarsky's blog, Rattle and Mum. 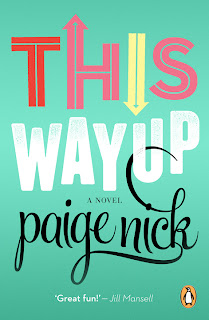 I had actually won Paige Nick's first book on her blog, A Million Miles From Normal, and could not wait to sink my teeth into the second. Paige Nick is a blogging extraordinaire, copywriter and columnist for The Sunday Times...her book could never in a million years not be great!

We follow the lives of two contrasting characters. One being Stella, who is newly married and happily plodding along in her controlled bliss, until the day that shatters her existence, family and marriage; and Poppy who is hitch-hiking across America, with nothing but a backpack and a pink hairdo. Paige Nick manages to create moments that are equally hilarious, yet poignantly serious at the same time.

I absolutely loved this book and after just coming back from London, I cherished the many South Africanisms. I am excitedly awaiting the third novel :)

I also got a copy of Julie and Julia, which I had already read, but who can ever get enough of that book?


Posted by Little Miss Medic at 29.3.12 No comments: Links to this post

Email ThisBlogThis!Share to TwitterShare to FacebookShare to Pinterest
Labels: A Million Miles From Normal, book review, books, Paige Nick, Rattle and Mum, This Way Up 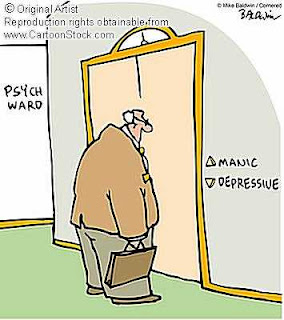 Yesterday I had to go and see a psychiatric patient. I don't usually see these kind of patients, unless they are all kinds of crazy in the labour ward, which is common. This woman gave birth the previous day and had been all kinds of crazy during delivery AND BEYOND! She had threatened to kill her baby and now I had to go and make sure her uterus and vagina were safe. I didn't really care, I just wanted to see her and get the hell out of there.

I had to get directions to her lock up ward. It was in the dark recesses of the hospital. So far away, I had to get directions. I arrived it to find it to be a real LOCK-UP ward, with a security guard to let me in. I was then lead through to a row of individual steel cells. I had no idea how crazy this lady would really be and suddenly I was on the inside of the cell and the nurse had closed the door behind her. EEK!

Said crazy lady was sitting on her bed reading a magazine. She looked harmless, but looks can be deceiving when dealing with the crazies. I slowly went over to her and started to ask her questions about her birth. She rattled on about unrelated things and I quickly did my exam. She was perfectly fine and I made my way to the door to be let out. No one opened up for me. I then started frantically banging on the door, afraid I would never see the light of day. Eventually the nurse opened the barricade and I high tailed it out of there!

xoxo
Posted by Little Miss Medic at 28.3.12 No comments: Links to this post

I know these photos have been doing the rounds, but I just have to give my own 2 cents worth... 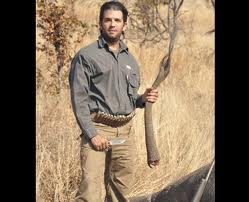 These photos were taken 2 years ago when Eric and Donald Trump Junior went on a hunting trip to Zimbabwe. People argue that the money they spent to kill these beautiful creatures is going towards conservation. What kind of an oxymoron is that? Kill animals to protect them from being killed by others, makes no fucking sense to me.

In case you were wondering, that is not a tree stump that Don is holding, but an elephant's tail. It wasn't enough to murder it, he had to maim the animal by cutting off it's tail as proof of his power. 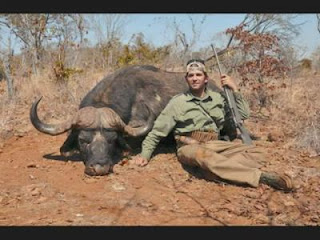 Wow a buffalo! You are the man, well done! 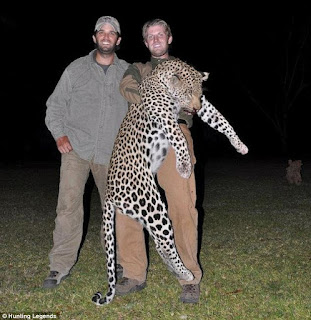 
This one actually makes me want to cry! A leopard is one of the most beautiful wild animals out there. It is such a treat to get to spot one in the wild! 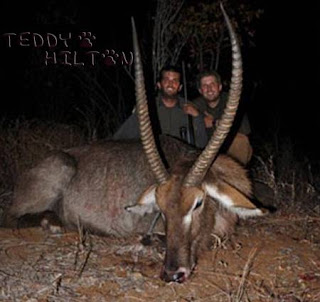 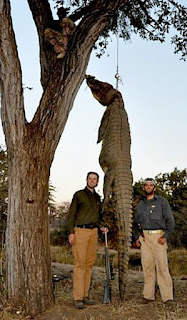 I wonder if they needed a stylist to choose the vast array of different shades of khaki outfits they wear? The fact that these 2 Hollywood zeros actually managed to shoot so many animals makes me think they might have been tethered in a pen and this is why we only get the "after" shots.

All I can say, is that I think it is absolutely disgusting and I would like to see one of their heads as a stuffed wall trophy!

xoxo
Posted by Little Miss Medic at 27.3.12 No comments: Links to this post

Every 4 weeks we get new students. At times they can be incredibly annoying or slightly helpful, but no one really loves having students around.

The 4th year ones are there to catch their required 10 babies. They know nothing. They have not seen many vaginas. Especially the ones with babies head's coming out of them. They scare easily and they have never worked a night shift before. Invariably you will find them either asleep in a corner or fainting from sheer horror at seeing blood, placenta, shit and baby parts, in no particular order.

The 6th years know nearly nothing. This is the year when they practice being interns, which is what they will be next year. They have seen a few vaginas. They have never worked a night shift since 4th year. Their job is to help the intern and assist you whilst you do the casear (ie they hold shit for you during the operation). They will either be found asleep in the corner or asleep in your bed, which is fucking annoying when you are actually lucky enough to get to go and sleep.

At the end of their 4 weeks we have a meeting, where we discuss how retarded they are, whilst eating cake and drinking tea. It is the highlight of the month! No one holds back, from consultants to interns. We slate their personalities and shred the essence of their very existence. Then we give them a mark. If they are SUPER shit, we never fail them. That would mean that they would have to come back for another 4 weeks and that would be even worse than passing a shit student. 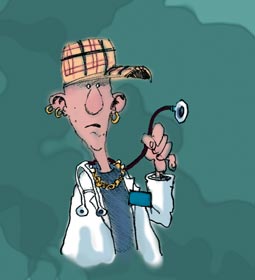 Posted by Little Miss Medic at 20.3.12 No comments: Links to this post

xoxo
Posted by Little Miss Medic at 14.3.12 No comments: Links to this post

I have said this countless times, although I never can quite say it enough...

NOTHING and I say nothing, brings out the crazy like a woman in labour!

I was on call on Friday night. It was the usual combo of millions of caesars and fun and games in the labour ward. When you have worked in a labour ward for a while, you don't even notice the screaming of women giving birth. It just becomes the norm to have shrieking, grunting and even crying as background noise.

ENTER 19 year old patient.......no....19 year old CRAZY patient! This patient definitely used drugs. No amounts of morphine could dull her pain and she only weighted 45kg. This little package of dynamite came without front teeth, a foul mouth and with the biggest attitude I have ever seen. During labour, she broke expensive equipment that monitors the baby's heart rate, swore at me on multiple occasions, pinched me and even tried to hit me. Her favourite was to scream "Mooooommmmmmmmmmmmmmmmyyyy" during each contraction. I eventually phoned her Mom, thinking she might instill some sanity. She was a 20 year older version of the patient, and now I had 2 of them to deal with.

As the baby's head was crowning, she refused to push, instead choosing to stick her hands into her vagina. How this was going to help, I did not know, unless she wanted to deliver her own baby, anyhoo. The absolute best was when she started pinching her own nipples and screaching "Jesus!". The baby's head had not moved a millimetre. When we ordered her to push, she grunted with all her might, yet the baby's head went nowhere. Eventually after much coaxing the little thing was born absolutely flat and very lifeless. After giving it some oxygen and good rub down, it eventually started crying. As I dried the small infant, I said to it...
"Sorry small baby, but your Mom is fucked in the head. Your life will not be easy!"

xoxo
Posted by Little Miss Medic at 13.3.12 No comments: Links to this post

The shortlist will be announced on the 17th of April and the winner on the 30th of May. My first read will be Emma Donoghue's book, as I absolutely fell in love with Room last year.


Enter simple, ugly, stupid fucker. His wife has just had a baby. their first child. As the small family sit together, I am on the other side of the curtain with another patient and this is what I hear.

Simple-Ugly-Stupid-Fucker: No man, why doesn't he wanna drink yo milk?

SUSF: *in baby voice* drink my boy, it's yummy milk. I promise!

Proud Mother: Just let him be!

SUSF: Sies man! That is disgusting!

My patient: *turns to me and whispers* Did that man just drink his wife's breast milk?

LMM: *whispers back* I think so. 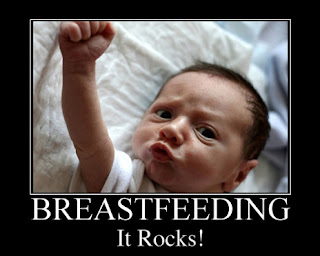 
Posted by Little Miss Medic at 6.3.12 No comments: Links to this post

A Visit From the Goon Squad

This was my final London bookclub read. I am extremely sad to have said goodbye to all the wonderful ladies that I have spent the last year getting to know. We had amazing evenings, filled with intelligent chatter, tipsy gossip and yummy food. The best part of the night would be when we would all discuss the last month of our lives. Each person would chat a bit and then everyone would turn to me and say, "So LMM, what crazy, funny, ridiculous stories can you tell us about your patients?" Ha! Their bookclub will definitely not be the same without my patient anecdotes :)

This brings us onto the topic of final read. What can I say about this book? To be completely honest, I cannot even tell you what it is about. Each chapter jumps to a different time with different characters. I thought it would all come together in the end, like an Oprah "a-ha" light bulb moment, but it didn't. There was shoplifting, a music, coffee with gold flakes, but I cannot for the life of me find the gist of the story. Some characters did reappear, but by then I couldn't remember where they came from.I was confused and kept wondering if I was the only person who was retarded enough not to "get" this critically acclaimed novel. If you have read it, please help me out!

I am now on the prowl for capetonian readers to start my very own bookclub.

xoxo
Posted by Little Miss Medic at 1.3.12 No comments: Links to this post

Promote Your Page Too

Welcome to Little Miss Medic, thanks for stopping by!

Little Miss Medic
South Africa
I am a lowly doctor working in a hospital, attempting to specialise. Book lover, fashion follower and eternal pessimist. All the stories are true, but names have been kept anonymous. I use the word "fuck" a lot, so if it offends you, fuck off! xoxo